In 2014, James Somers sat down to write a beautiful, entertaining lament about the state of today’s dictionaries and an argument in favor of the adoption of Noah Webster’s 1913 edition.

I don’t want you to conclude that it’s just a matter of aesthetics. Yes, Webster’s definitions are prettier. But they are also better. They’re so much better that to use another dictionary is to keep yourself forever at arm’s length from the actual language.

Recall that the New Oxford, for the word “fustian,” gives “pompous or pretentious speech or writing.” I said earlier that that wasn’t even really correct. Here, then, is Webster’s definition: “An inflated style of writing; a kind of writing in which high-sounding words are used, above the dignity of the thoughts or subject; bombast.” Do you see the difference? What makes fustian fustian is not just that the language is pompous—it’s that this pomposity is above the dignity of the thoughts or subject. It’s using fancy language where fancy language isn’t called for. It’s a subtle difference, but that’s the whole point: English is an awfully subtle instrument. A dictionary that ignores these little shades is dangerous; in fact in those cases it’s worse than useless. It’s misleading, deflating. It divests those words of their worth and purpose.

You can read it all here. It’s worth your time..

Not happy with the essay alone, he also added instructions on installing Webster’s on a Mac. Unfortunately, I could not get them to work on Catalina: the DictUnifier app would crash as soon as I dragged the dictionary file on it. A little research revealed that DictUnifier has a problem with Catalina. The suggested workarounds did not work for me. In the process, I learned that DictUnifier has gone unmaintained. Thankfully, a couple of years ago a good soul released DictConv, a “Node.js version of DictUnifier”. DictConv did the trick. Webster’s 1913 is now happily residing in my macOS Dictionary. 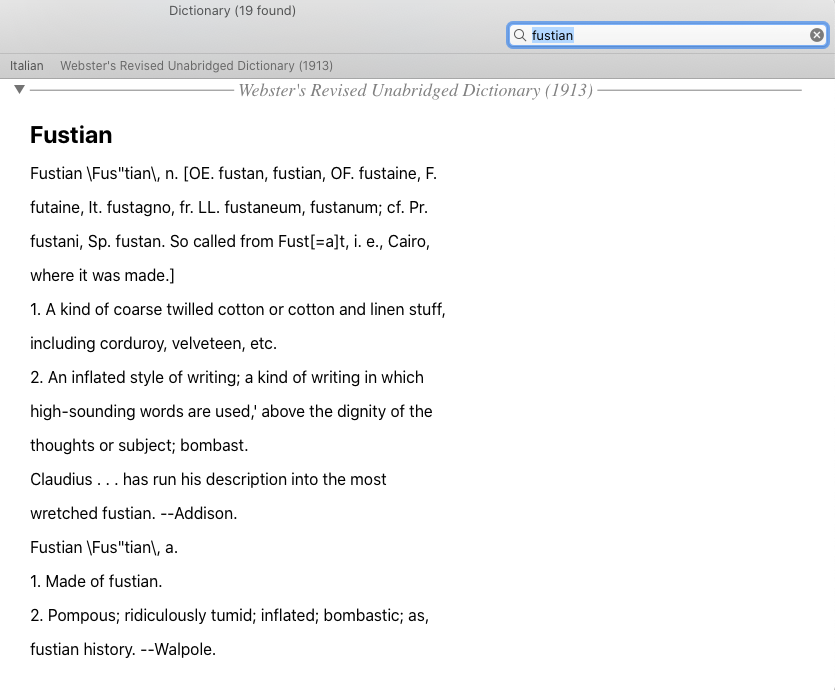