Trade Wars 2002 was a great 1991 online game I hosted on one of my BBSes back in the day. Not sure if it was Lorien or Phoenix BBS; it might have been the latter given the game’s release date. I totally forgot TW2002 until yesterday when I spotted this 1991: Trade Wars 2002 article on the 50 Years of Text Games newsletter. 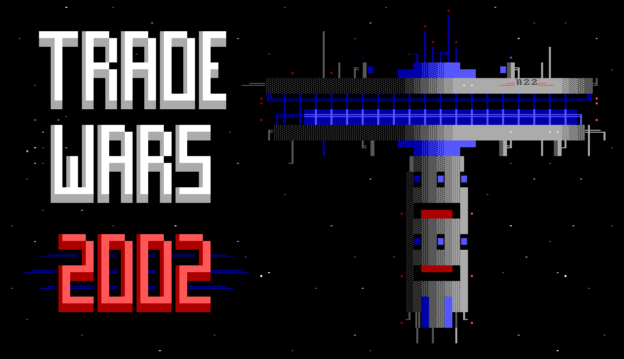 I humbly confess that, until yesterday, I never made the obvious connection between TW2002 and Eve Online. That’s quite startling considering that I’ve been a beta player first and then an avid Eve player for a few years (Eve was also the last game I seriously played on a computer.)

In retrospect, what’s surprising is that Station Interaction, possibly the best trait of TW2002, never really made it to Eve Online (not in my playing timeframe, at least).

The StarDock was a key addition to Martin’s version of the game that went a long way toward making its galaxy feel more like a dynamic, living place. It’s filled with things to do: shop, gamble, visit a theatre to watch ASCII-art sci-fi parody “movies” (short animations) with titles like Vulcan Thunder. But more interesting are the chances for community interaction. The StarDock’s tavern provides a range of different ways to interact with fellow players: among other options, you can pay credits to post a public message that everyone will see, add to the graffiti scrawled on the bathroom wall, or pay a “grimy Trader” in the back room to learn information about other players, such as what sector their ship was last seen in. The grimy trader could share a huge selection of hints and useful info about the game state, provided you could think of the right things to ask him about and had the credits to pay.

The StarDock also holds secrets: the large menu of available commands doesn’t show all the options available. Pressing a key not listed on the menu would describe your character exploring the seedier, lesser-known parts of the station. A particular unlisted key would lead you to a locked door and a secret password which, once learned—from the grimy Trader, perhaps, or another player—admits you to the Underground, where nefarious players can buy illicit goods and coordinate against law-abiding Federation forces.

Eve was (probably still is) a fantastic concept. I was Jexter the Caldari. With my friend Fist, we founded a small roleplaying space-pirate group known as Jokers. Back in our time, I think we made the news.

But what we found always missing was space station interaction. Besides a generic system-wide chat, nothing encouraged players to spend time (and roleplay!) while their ships were docked at those stunning space stations. That’s something TW2002 nailed down to near perfection. I wish Eve had that. It could have kept me in the game for far longer.

Open Source: What Happens When the Free Lunch Ends?

So tired of Homebrew messing up with my stuff