So yesterday Visual Studio 2017 was released. Big news. Lots of cool stuff. As I write this I am watching the live stream of the 2 days-long launch event. If you want to learn about Python support in VS2017 though, you have to dig deeper and head over to the Python Engineering blog at Microsoft.

As expected, the official release is actually coming out with no support for Python. It will come in a few months. Bummer. In the meanwhile however you can go and grab the (also newly released) Visual Studio Preview. This new kid on the block has the ability to be installed and used side-by-side with the official release and will be used - you guessed it - as an early preview of what’s coming next for Visual Studio.

Now you might be thinking that two installs are overkill, and I concur. Because Preview includes all the official features, you might also think that you can probably get away with only installing Visual Studio Preview. That would work, but here is the catch: Visual Studio Preview has no support for paid product offerings. So if you are a Professional or Enterprise user well, you are out of luck.

This is not ideal. Python pulled out of RC3 was understandable, although unsettling. Not included with the official release? Not pretty. For most people, I suspect, the gimmicks required to get Python to work with Visual Studio 2017 are unbearable. Personally, I will fallback to other solutions and wait until Python Workload gets merged back with the official offering.

I am still convinced that in the long run Visual Studio with its Python Workload will become the best option to do Python on Windows (Visual Studio Code being the second best candidate). I mean, look at this beauty: 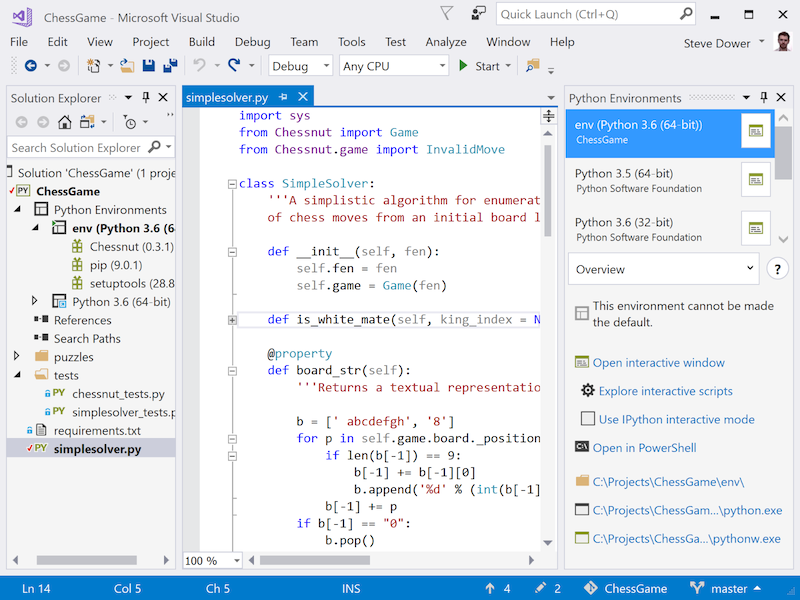 Combined with the VsVim extension it makes Python coding on Windows almost as great as Vim+bash I’ve been using so far, but within Visual Studio which I use for all my other coding (don’t get me started on C# in Vim. That is material for another post maybe.) I am also totally sympathetic with the dev team. I have been in this business for longer than I care to admit and I do know these things happen. But still, there is no dobut that this unfortunate incident marks a serious setback.

In less than one month I will be givin a talk at PyCon Italy. It is titled Python on Windows Like a Boss and the heart of it was of course going be the Python Workload for Visual Studio 2017. With this turn of events I will probably end up going on stage with the previous version of the tool, and Visual Studio 2015.

Or I will bite the bullet and install 35 gigs of mostly duplicated software.

Join the newsletter to get an email alert when a new post surfaces on this site. If you want to get in touch, I am @nicolaiarocci on twitter.