I went on a motorcycle trip. A fellow TOMCC1 member was planning a solo trip to Campo Imperatore (“Emperor’s Fields”), the well known alpine meadow in the Apennine ridge. He called me as he was looking for some advice, and well, I ended up joining him.

What sparked my interest was the destination, of course, because Campo Imperatore is a superb place to visit, especially on a motorcycle, but also Antonio’s peculiar take on the journey. By self-admission, he is old-school. His motorcycle forays, no matter how long they are, all have something in common: as little technology as possible. He also goes out of his league to avoid highways and, god forbid, toll-roads. He is keen on secondary roads and, most importantly, he does not plan any route. Antonio will write down a few waypoints on paper, just the names of maybe two or three places worth visiting, and that’s it. If the trip is going to be very long, he might take a (paper) road atlas with him. The little details, like filling the gaps between waypoints, or how one would go to reach the waypoints themselves, well, they are all left out for the adventure.

By this point, most motorcyclists will roll their eyes, and quit reading. We are there to enjoy the ride, right, not to role-play the cowboy riding down the lone adventurous path. Nuances like planning the fastest route to the destination, gas stops, places to eat, well, those are all dealt with GPSes, and other apps like, say, TripAdvisor. That’s right. But frankly, Antonio’s old-style take to motorcycle traveling is intriguing to me and also challenging. Motorcycling is about freedom. And what is the best freedom than being free to change and choose the route arbitrarily, at every single crossroad if so you desire?

It is remarkable, by the way, how something mundane until not too long ago looks ancient by today’s standards: in another life, many years ago, I was a traveling salesman (actually I was half programmer, half salesman, but that’s another story, maybe for another post.) Back then, using road atlases and maps was the norm. I would waste hours bent over maps, just trying to figure out my way around. Today, no one, maybe except the oldster, uses paper maps.

So we met early on Saturday, at a truckers bar not too far away from my place. At that point, Antonio had already covered a steady 140KM, 2-hours long road stretch. To my relief, he had his old-school road atlas with him. We both had a strong black coffee, then off we went, southbound.

As expected, we had to stop every once in a while to check our bearings. We had to ask for directions a couple of times. And yes, of course, we ended up logging way more kilometers (and time) than we would have logged if we followed my TomTom directions (admittedly, I had it with me tucked somewhere - I could not resist the urge to take it along.)

We reached the beautiful town of Teramo at nine in the evening, about twelve hours after we departed. We found ourselves a cozy place for the night, had a quick shower, and then off we went down the historic town center, looking for a meal and a glass of wine. The next day, more or less the same story, but including the incredible views over Gran Sasso, the visit to Campo Imperatore, and other scenic places along the route. 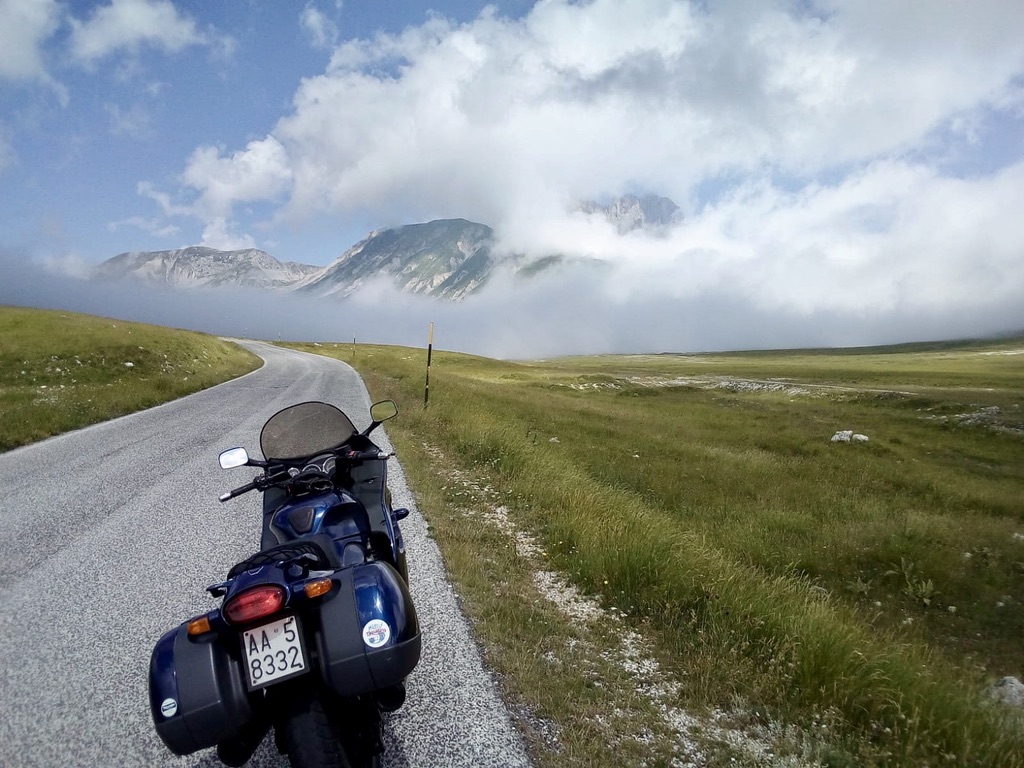 Evidence that Antonio’s Triumph Trophy successfully made it to Campo Imperatore.

I breathe technology for a living, but from time to time, I do have to disconnect. In the past, I used to achieve disconnection with several activities like hiking, climbing, running, or even reading a good book. I find that riding a motorcycle, bet it for a quick, post-work evening cruise around town, or an extended, multi-day road trip instead, that gives me just that. Surprisingly, though, because when I was hiking on a trail, or puffing and sweating while hanging off a Dolomites wall, I sure as hell was not too fond of the occasional motorcycle noise down the road.

This trip with Antonio taught me that unbound motorcycling, with just a clean sheet, can be even more liberating. I thought it could be stressful; it turns out it can be exciting instead. Going analog is good. Embracing the chance of getting lost is good. Running some (reasonable) risk is good as well. After that trip, I got back to my everyday coding refreshed, internal batteries replenished, likely just as much as they would after a mountain hike, climb, or run. The added benefit was learning about beautiful new unknown places, seeing terrific, unexpected views, meeting and talking to new people along the road.

Not all motorcycle adventures can be this bold, though. The following weekend I went on another motorcycle trip, this time with my spouse. We visited the beautiful Tuscany. She would not appreciate the braveness (or stupidity) of leaving with no plans and no route. And that is ok.

With Antonio, we are now determined to make gypsy trips (as we ended up calling them) an annual event. Rare enough stay desirable, frequent enough to remain a tradition.

And now, back to coding.

PS. In terms of disconnecting, reading a good book still reigns supreme. It also happens to be both more affordable and more accessible than, say, motorcycling.

Events and callbacks in the Python language

A trip down memory lane: FidoNet and Usenet