As I was browsing my RSS feed this morning, I came across a new blog from Nat Friedman over at GitHub. The piece was titled “Open source goes to Mars”, and, of course, it caught my interest. In the article, Nat announced a Mars 2020 Helicopter Mission badge added to GitHub profiles contributing to open-source projects and libraries used by Ingenuity. Some time ago, like many others, I was granted the Arctic Code Vault badge, so I am familiar with the concept. I quickly dismissed the information as “nice, not gonna get it” and moved along.

Later during the day, I got a mail from an Eve contributor. In between other things, he briefly congratulated me on my new GitHub badge. I went to check my profile, only to find that, indeed, I am a Mars Helicopter Contributor. I was bewildered. To my knowledge, I never worked on something even remotely related to the Ingenuity mission.

Years ago, I received a package from a software team at a private space agency whose name I cannot tell. They sent me a lot of cool swag and a hand-written letter signed by all team members. In it, I learned that they had been using one of my open-source projects with success. They added that I should take pride, as my work was used in one of their renowned space ships projects. The package was their way to express gratitude. If you’ve attended any of my talks in the past, you probably know this story. You might have seen me wearing one of their t-shirts too. I knew my work was used in many places; I certainly did not expect it was contributing to a space ship program.

So when I reached for my profile page on GitHub today, I was confused, yes, but not wholly unprepared. And indeed, there it is, the new, shiny Mars Helicopter Contributor badge. A quick investigation revealed that I earned it as a Flask contributor. To be honest, I don’t even remember contributing to it1. I know I’ve used it extensively, of course, as Eve inherits from and builds on it. 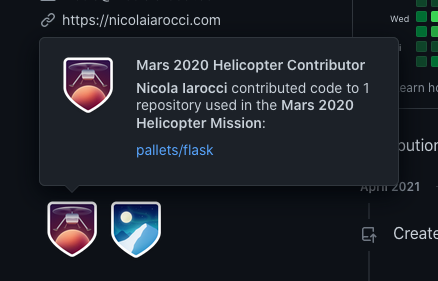 So, what to make of all of this? I am happy, of course. I have a badge of honor to show off to my kids later this evening. I appreciate the intent:

“Many of the people who are getting a badge probably have no idea their software is being used to fly a helicopter on another planet,” says GitHub Senior Director of Developer Relations Martin Woodward. “We wanted to make sure everyone was recognized for their contributions to this incredible human achievement.” (source)

These badges surely help raise awareness of open-source relevance in the modern-day world. I am grateful for it. I have to say, however, that I am not a fan of the current gamification process going on at GitHub. I cringed when I saw the “How do you feel today” box in my profile page a while ago2. This Achievements feature looks good on the surface. Still, it leans itself to be leveraged in many different, even subtle ways. Let’s hope for the best.

Adding is favoured over subtracting in problem solving (and software systems)