Some call them homeless. The new nomads refer to themselves as ‘houseless’. Many took to the road after their savings were obliterated by the Great Recession. To keep their gas tanks and bellies full, they work long hours at hard, physical jobs. In a time of flat wages and rising housing costs, they have unshackled themselves from rent and mortgages as a way to get by. They are surviving America. 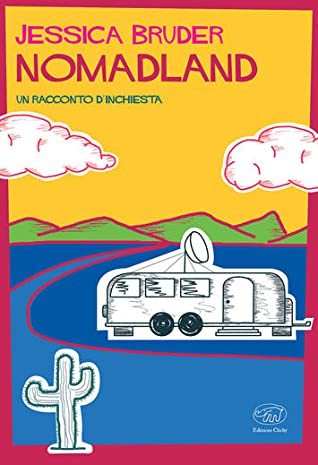 Jessica Bruder is a journalist. For three years, she followed the lives of a group of nomads who live in their RVs or even in their cars, moving from one seasonal work to the next in their pursuit to survive the collapse of their own personal American Dream. Her writing is dry, concise, with little room for personal feelings or ramblings, to the point that, at times, she sounds distant, almost detached from the events being told. That isn’t the case, as you can tell by the second half of the book when she finally decides to take the plunge and get herself a van to live herself the “workcamper” life. That is a tipping point in the book. The author becomes the main character, the story is personal, and the reader is more involved.

Bruder interviews many folks and followed a few of them in detail. Linda May, amongst others, is the centrepiece of the story. Linda was 62 when she took social security and was forced into living in a van. Most people living the “workcamper” life are in what would be their retirement age. They are in their 60s, 70s and sometimes even 80s. Yet, they work very hard at their seasonal jobs, like at Amazon warehouses as inventory scanners or in Minnesota and North Dakota, for the seasonal harvest of sugar beets. These work experiences are depicted with great detail. Bruder herself walked the plank and experienced how demanding these assignments are on the body and the spirit (Amazon provides painkillers to their aged employees). Despite all the difficulties, these people carry on with great dignity and, often, upbeat attitude, well represented by Linda, a lovely elderly woman.

I had no idea that the “workcampers” subculture existed in the USA. As someone who has always been mildly fascinated by the RV life (like many others, we sometimes fantasize about travelling the world in a camper when we retire), I admit I was pretty shocked by this work, an engaging and very unsettling read. I am grateful to Bruder for her hard-earned report.

At one time there was a social contract that if you played by the rules (went to school, got a job, and worked hard) everything would be fine. That’s no longer true today. You can do everything right, just the way society wants you to do it, and still end up broke, alone, and homeless.

PS. By pure coincidence, I came across the awarded Nomandland movie only a few days after finishing the book. It was great. At first, I was startled by the acting of some roles. Then, by the final credits, I realized that it wasn’t professional actors who played those roles. It was the actual persons from the book, Linda May included, who played themselves.

Travel is no cure for the mind