“Kublai Khan does not necessarily believe everything Marco Polo says when he describes the cities visited on his expeditions, but the emperor of the Tartars does continue listening to the young Venetian with greater attention and curiosity than he shows any other messenger or explorer of his.” So begins Italo Calvino’s compilation of fragmentary urban images. As Marco tells the khan about Armilla, which “has nothing that makes it seem a city, except the water pipes that rise vertically where the houses should be and spread out horizontally where the floors should be,” the spider-web city of Octavia, and other marvelous burgs, it may be that he is creating them all out of his imagination, or perhaps he is recreating fine details of his native Venice over and over again, or perhaps he is simply recounting some of the myriad possible forms a city might take.

Invisible Cities is a collection of thoughts taking the form of cities or cities taking the form of thoughts. It is an aesthetic and allegorical description of some fictional, mostly surreal cities. Some of the portrayals are fabulous: these cities suddenly come to life in the reader’s mind thanks to Calvino’s mastery, who manages to materialize absurd cities, which have nothing of the cities we are used to observing day after day; yet they appear to us almost natural, absolutely possible, and charged with a suggestiveness that no earthly city could have. In addition to the vivid images, however, we will be confronted with the thought that the shapes of those cities give rise to the figure of their inhabitants, who may represent various sides of human nature.

I can’t help but think of suggestive architectures mentioned in other works, like Mervyn Peake’s Gormenghast series or Hayao Miyazaki’s animes. In Peake and Miyazaki, architecture plays a fundamental and often active role (think of Howl’s Moving Castle). Likewise, Calvino’s Cities are absolute protagonists, while Marco Polo and the khan are mere means to the narration. 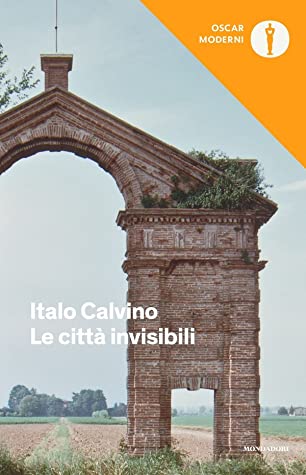 Invisible Cities is one of Calvino’s best works. Like others of his, it might even appear light to the superficial reader while it’s chock full of precious insights and profound thoughts delivered by a master at the art.

The inferno of the living is not something that will be; if there is one, it is what is already here, the inferno where we live every day, that we form by being together. There are two ways to escape suffering it. The first is easy for many: accept the inferno and become such a part of it that you can no longer see it. The second is risky and demands constant vigilance and apprehension: seek and learn to recognize who and what, in the midst of inferno, are not inferno, then make them endure, give them space. ― Italo Calvino, Invisible Cities